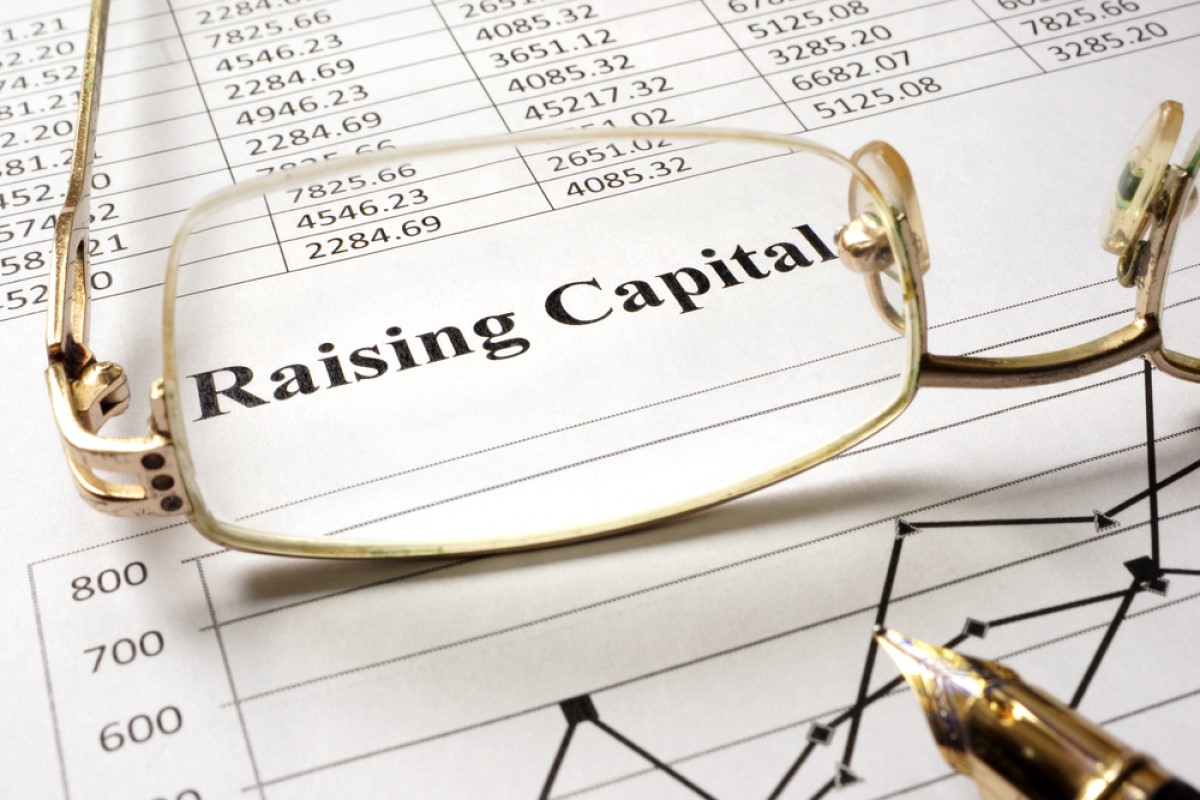 The passage of the EB-5 Reform and Integrity Act of 2022 (the “Act”) has created some interesting and complicated hurdles for EB-5 Issuers looking to finish pre-Act EB-5 offerings. Setting aside much of the confusion associated with the status of regional centers under USCIS’s interpretation of the Act, much of which is playing out in active litigation as of the date hereof, there remains much in the Act that requires policy guidance from USCIS (“Policy Guidance”).

In the absence of such Policy Guidance, the authors have worked on a number of pre-Act offerings wading through the disclosures necessary to ensure that the differing treatments and allocation of obligations are appropriately distributed and/or shifted between pre-Act and post-Act investors, regional centers, EB-5 issuers and if applicable, fund administrators. In connection with that, below is a list of considerations that should be taken into account when working on offerings that are being revamped following passage of the Act.

1. UPDATING OFFERING: The EB-5 Issuer should consider amending and restating the pre-existing Offering documents to restate all previously disclosed information with detailed and appropriate updates.

2. MULTIPLE CLASSES: The EB-5 Issuer should consider creating more than one class of EB-5 investors. The structure chart in this article details the complexity associated with an offering that has gone through multiple cycles of investor classes. Prior to Nov. 21, 2019, it raised EB-5 capital from investors at $500,000 a subscription. Between Nov. 21, 2019 and June 21, 2021, it raised EB-5 capital from investors at $900,000 a subscription as a result of the passage of the DHS regulations (“DHS Regulations”).  Between June 30, 2021 and March 15, 2022, it spun off a separate new commercial enterprise from the job creating entity, and raised direct EB-5 investors at $500,000 a subscription.  Post enactment of the Act, it is now raising EB-5 capital at $800,000 an investor. One can imagine just how complicated the offering documents and related operating agreement gets with so many different considerations.

3. RECOGNITION OF FEES: The amendment, to the offering documents, must include a supplement to the Subscription Agreement that requires the subscriber to acknowledge all affiliated party compensation, including the payment of administrative fees and allocable interest/preferred return payments payable on account of the loan or equity funding.

5. DISCLOSURE: The amendment and restatement of the Offering documents would incorporate the relevant provisions of the Act and the published rules and regulations. The disclosures would also need to explain the existing backdrop of interpretation and relevant litigation.

6. ESCROW: A nuanced and complicated component would be dealing with existing escrow agreements and third-party administrative services. If an EB-5 Issuer was working on a new offering, it would be much easier compared to dealing with prior investors whose capital may either fully or partially still be held in escrow. Dealing with pertinent release of such EB-5 capital, from escrow, is further complicated by the status of the regional center program. As such, disclosures and relevant discussions must be held with the pre-Act’s existing investors with respect to the release of such EB-5 capital, from escrow, if applicable.

7. TEA IMPACT: The post-Act Offering would need to carefully deal with targeted employment area (“TEA”) designations. Previously, designation for TEAs were held with state and/or local bodies until passage of the DHS Regulations when the authority for such designation shifted to DHS. Those DHS Regulations were subsequently vacated by a court ruling on June 21, 2021. With the passage of the Act, the TEA designations have once more been returned to DHS under a more restrictive qualifying definition of TEAs.

8. RESERVED VISAS: The post-Act offering will also need detailed and nuanced disclosures related to reserved visas and, in certain circumstances, priority processing of EB-5 petitions for projects located in rural areas. The Act sets aside certain reserved visas each fiscal year and the US State Department has, as a result of the Act’s guidelines, starting in the May 2022 Visa Bulletin, created new fifth-preference visa categories where available visas during a fiscal year are distributed as follows: 20% are allocated to projects that are located in rural areas, 10% for projects in high unemployment areas (most TEAs that are not rural would qualify), and 2% for infrastructure related projects. Any unused visas from such reserved categories would carry over from one fiscal year to the next fiscal year; however, unused visas thereafter would no longer carryover. With specific respect to just the rural projects, the Act outlines a requirement that USCIS “prioritize the processing and adjudication of petitions” associated with such projects.[1]

9. FUND ADMINISTRATION: The amendment must also address the requirements for fund administration oversight or require annual audits. The Act has established strict parameters surrounding the NCE’s maintenance and oversight of the EB-5 capital. The Act first requires that separate accounts be created for the EB-5 capital at the NCE level. It is unclear if this requirement also extends to the JCE, in a situation where the NCE and the JCE are unrelated.  In addition, except as waived below, the NCE is also required to retain a Fund Administrator, which meets certain qualifications and is unrelated to the NCE, its management or the JCE and related affiliates. The Fund Administrator must be an attorney, accountant, registered investment advisor or broker dealer, or is authorized deemed qualified. The Fund Administrator is required to also be a joint signatory on the separate account and must make available the information related to the transactions of the account and the maintenance on a periodic basis to all investors in the NCE.  In the event the NCE, and possibly the JCE, perform an annual audit under GAAP standards, the requirement for Fund Administration is not applicable. Therefore, as part of the amendment of the Offering documents, the EB-5 Issuer must carefully think through this requirement to ensure it is in compliance.

10. COMPLIANCE: The Act also substantially increased Regional Center compliance obligations, including (a) annual audits and related recordkeeping functions; (b) annual filings; (c) securities compliance related certifications; (d) Regional Center ownership requirements; and (e) annual fees. As a result, the EB-5 Issuer must closely work with the Regional Center to ensure that such entity is capable of complying with the terms and conditions of the Act.

Based on these factors, the following steps must be taken to continue the pre-Act project documentation

(1) It must renegotiate its underlying agreement with the sponsoring Regional Center.  In connection with that, some sponsors may consider forming their own Regional Center. Negotiation factors include the sharing of regional center costs, the coverage of fees to third parties for necessary due diligence and document review, and the ultimate sharing of all fees and back-end payments.

(2) Addressing the fund administration or required audits to meet the requirements of the Act.

(3) Updating the economic study and business plan in conformity with the provisions of the Act. As an example, given the nuances surrounding the creation and reporting of jobs, the overall project may have a reduced the number of eligible jobs to support pre- and post-Act investors.

(4) Working with the economist to secure a TEA qualification letter that will be subject to USCIS approval. 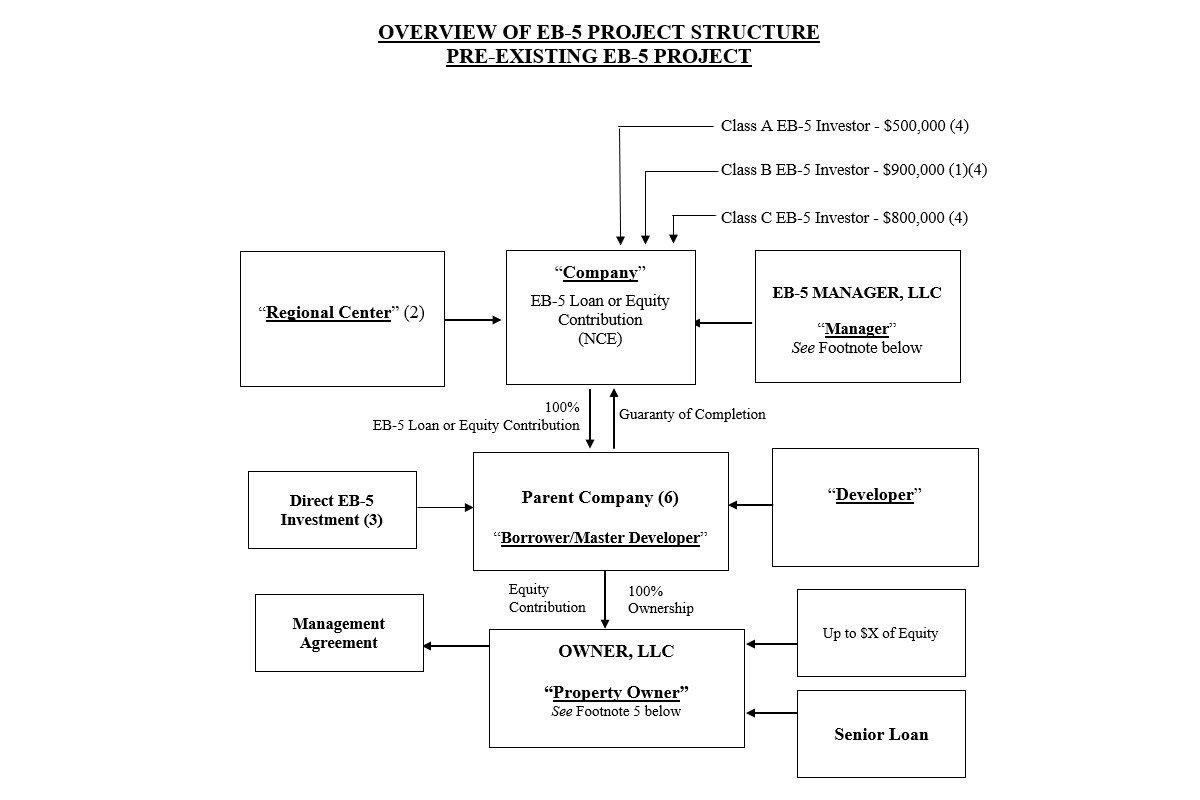 All in all, topping off a pre-Act Offering is even more complicated than setting up a new offering entirely.  One cannot be cavalier about the process and must seriously consider how to work with pre-Act investors such that those investors are not harmed in any way by actions of the EB-5 Issuer seeking to raise additional capital.

Assuming no $900,000 investment has been made, the following language would apply:

Prior to November 21, 2019, the investment amount per EB Investor was $500,000.  Thereafter, no investor proceeds were received until between June 22, 2021 and June 30, 2021, during the time period when the New Regulations were invalidated until such time as the EB-5 sunsetted on June 30, 2021. The Company received a total of $X of investor proceeds at a subscription amount of $500,000 per Unit (the “Class B Members”).  As of the New EB-5 Legislation, the investment amount of the Project (assuming TEA classification) has been increased to $800,000.

There could be a Co-Sponsoring Regional Center that has filed for approval, post-Act, and would, as a result, need to be disclosed.

There could be a potential that a separate EB-5 offering was set up raising capital from direct EB-5 investors during the lapse of the Regional Center Program between July 1, 2021 – March 15, 2022.

There could be up to three (3) classes of EB-5 Investors who have invested different amounts.

There could be multiple owners of the Manager or more than one Manager/General Partner.

The structuring depends upon whether EB-5 is/was structured as a loan model or a capital contribution/preferred equity model.

Given the split of jobs between the classes of investors, there would need to be an appropriate job creation allocation agreement.

Need to address distribution of funds and how x% is accrued and unpaid interest/referred returns to NCE and how y% is distributed among the investors given timing differences.

Rohit Kapuria, vice chair and partner of Saul Ewing Arnstein & Lehr LLP’s Global Immigration and Foreign Investment Practice, handles private offerings under the EB-5 investor visa program. Kapuria regularly represents EB-5 lenders, EB-5 borrowers, banks, regional centers, real estate developers, investors working on direct EB-5 projects, and migration brokers. He has worked on over 500 EB-5 transactions, with a combined capital development cost in excess of $7.5 billion. He has received regular recognition for all of his efforts from the EB-5 industry at large and was also named Top 40 Illinois Attorney Under 40 to Watch in 2021.

Ronald R. Fieldstone, chair and partner of Saul Ewing Arnstein & Lehr LLP’s Global Immigration and Foreign Investment Practice, routinely serves as corporate/securities/real estate counsel in EB-5 immigrant visa investor offerings for an array of industries. Both developers and regional centers rely on his advice in these deals, resulting in his track record of handling more than 400 EB-5 projects with a combined capital raise in excess of $8 billion. He is chair of the firm's Opportunity Zones and Qualified Opportunity Funds Practice. Fieldstone received his undergraduate degree and his MBA from the Wharton School of Business and his law degree from the University of Pennsylvania.