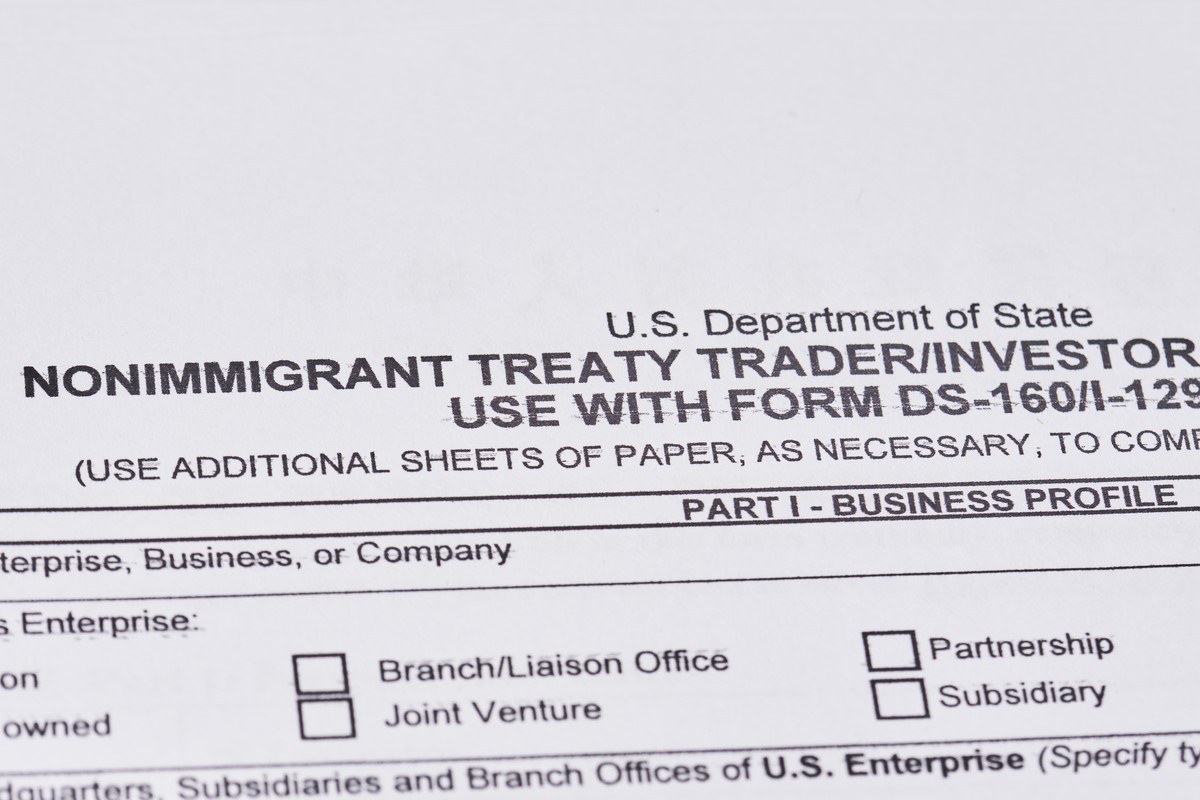 The E-1 classification, referred to as the Treaty Trader visa, allows individuals from certain treaty countries to come to the United States to engage in international trade. Principal traders (employers), along with select, essential employees are eligible for this program, which grants temporary nonimmigrant status to facilitate international business. Unlike the E-2 Treaty Investor visa, the E-1 visa does not require a substantial upfront capital investment, but is rather based on ongoing cross-border transactions.

The United States has long recognized that trade treaties can play a vital role in the global economy, and as such, it has signed numerous treaties of “Friendship, Commerce, and Navigation” (FCN). Foreign nationals from countries with these types of treaties are eligible for visas that will allow them to come to the United States to work and further develop investment in and trade with the United States. More recently, the United States has signed treaties directed solely to investment called bilateral investment treaties (BIT) and free trade agreements (NAFTA/Fast Track).  The Unites States has even entered into BITs with former communist nations, though such treaties were meant to promote investment without conferring any trade-related immigration privileges.

The visas available through such treaties are called E-visas, and come in two types: 1) E-1 Treaty Trader; or 2) E-2 Treaty Investor.  The following table identifies countries that have treaties with the United States allowing for qualifying nationals to apply for E-1 Treaty Trader status:

Noticeably absent from the list above is the People’s Republic of China.  While there has been some progress made toward establishing a free-trade deal between the United States and China (i.e. new agreements on climate control and military cooperation), both countries appear to be moving further apart in the areas of trade, investment and regional security.  The issues that divide these two giants are so vast that experts agree a free-trade agreement is far off in the horizon.  The E-visa category, therefore, is not an option for Chinese nationals put off by EB-5 visa retrogression numbers.

Qualifying for the E-1 Visa

To qualify for E-1 classification, the treaty trader (E-1 Employer) must:

1)     be a national of a country that maintains a qualifying treaty with the United States; and

2)     carry out “substantial trade,” the majority of which must be between the United States and the respective treaty country.

The “substantial trade” provision requires the E-1 applicant to be involved in continuous and numerous trades of goods and services between countries.  While there is no minimum requirement regarding the value or volume of each transaction, it must be significant enough to justify the trader or his/her employee being in the United States to oversee the trading.  In reviewing E-1 applications, the USCIS tends to examine the frequency and dollar value of transactions.  A single transaction, however large, will never constitute “substantial trade”(8 CFR 214.2(e)(10))

In addition to satisfying the “substantial trade” element of the E-1 visa, the successful applicant must also demonstrate that the majority (over 50 percent) of the total volume of international trade takes place between the United States and the trader’s treaty nation.  (8 CFR 214.2(e)(11))

To qualify for E-1 classification, the employee of a treaty trader must:

An executive or manager must have the authority and responsibility for overseeing all aspects of the business’s operations.  His/her trips to the United States should be primarily designed for developing and directing his/her employer’s trade.  Although there is no formal requirement that an executive or manager have worked for the treaty trader for at least one year (as in the L-1 visa category), USCIS will examine the person’s education, training, and work experience to determine his/her executive or managerial qualifications.

“Special qualifications” are those that make the employee’s services essential to the efficient and successful operation of the business.  Factors for consideration include proven expertise in the field, uniqueness of the employee’s skill-set, salary, and availability of similarly qualified workers in the United States.

Visas for this category of employee can be very difficult to obtain.  One must demonstrate that:

Once a trader has successfully obtained treaty trader status (usually following a four to eight week review), the task of obtaining E-1 visas for qualifying managers and executives is relatively simple and can be completed in about 10 to 15 business days.  Obtaining E-1 visas for employees with “special skills”, however, is far trickier and less successful.

E-1 visas are generally granted for an initial stay of up to two years, though they can be granted for up to five years.  E-1 visas can be extended in two-year increments as often as desired, so long as the E-1 trader and/or employee remain qualified for the status. Regardless of the number of extensions sought, all E-1 nonimmigrants must demonstrate that they are able and willing to depart the United States upon termination or expiration of their E-1 status because the E-1 classification is, after all, nonimmigrant in nature.

An E-1 nonimmigrant visa-holder may travel freely overseas. Upon returning to the United States, he/she will usually be granted an automatic two-year period of readmission.  Generally speaking, the E-1 nonimmigrant does not have to file a new Form I-129 in such a situation.

Anyone granted E-1 status is eligible to bring a spouse and any unmarried minor children (under 21 years old), regardless of nationality. Qualifying family members are typically granted the same period of stay as the treaty trader or employee.

Spouses of E-1 workers may now apply for general work authorization while in the United States, without any particular restrictions on the place or type of work. However, they must apply for work authorization separately. Children of E-1 visa holders, however, are not authorized to work in the United States, but they may attend school without changing to another nonimmigrant status (F-1).

Because the goal of E-1 status is to encourage international trade among select countries, a treaty trader or employee is required to only work the activity that he/she was originally approved for.  Consequently, any “substantive change” that affects the E-1 employer or employee should be disclosed to USCIS as soon as possible, as such changes must be approved by the agency.  A “substantive change” is any fundamental change in the employer’s basic makeup (i.e. merger, acquisition, re-organization, or any major event that affects the treaty trader or employee’s previously approved relationship with the business).  Treaty traders or employers can notify USCIS of such changes by filing a new Form I-129.  In this form, petitioners can request that the trader’s stay be extended, but must provide compelling evidence that explains why there is a continued need for the individual to remain on E-1 status.

Non-substantive changes don’t require USCIS notification.  However, if in doubt as to whether a change is substantive or not, a treaty trader or business may seek the advice of USCIS.  The request for advice must be in the form of a Form I-129 with both a fee and a detailed description of the change(s).

Alternatives for Employees Who do not Qualify for E-status

The H-1B specialty occupation visa is one possibility, though the current visa cap and lottery system make this visa category a literal gamble.  For people not from the People’s Republic of China (so not affected by visa retrogression), the EB-5 program provides some hope, though even the current minimum investment amount (US$500,000 in a Targeted Employment Area) and the processing times can be prohibitive for some.  For now, the L-1 intra company transfer visa seems to offer the best alternative to similar applicants.