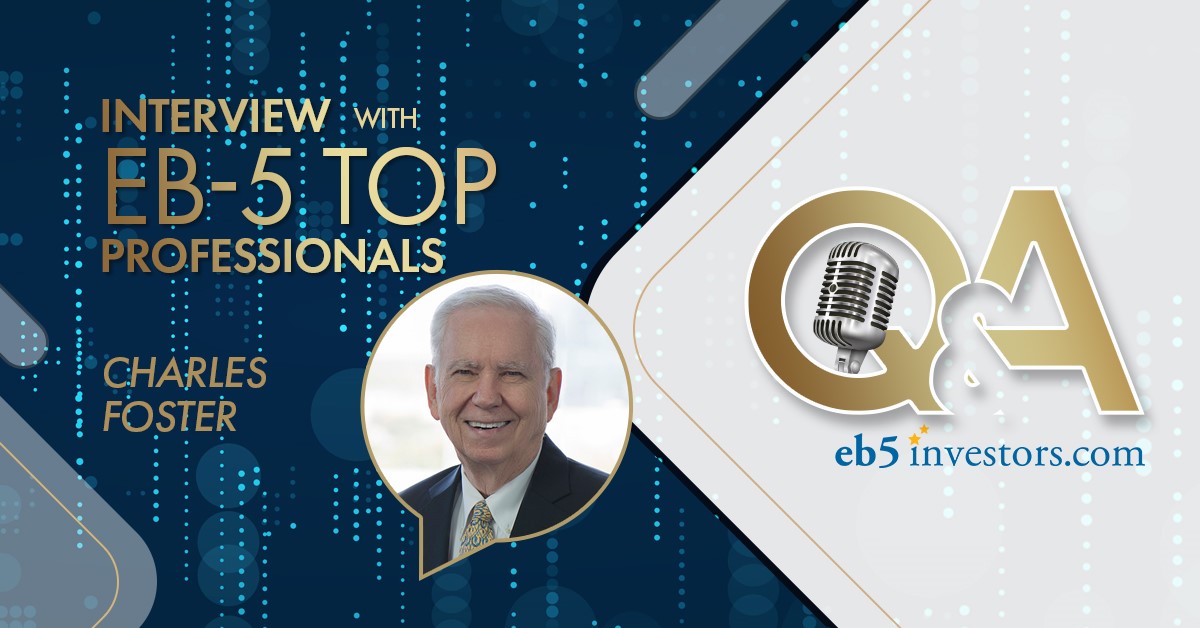 Charles Foster is an EB-5 attorney who began representing EB-5 investors when the EB-5 program started in 1990 and the regional centers since 1992. Currently, he is the chairman of Foster LLP, which is located in Houston. His legal background includes working as a senior policy advisor on immigration during the presidential campaigns of Presidents Barack Obama and George W. Bush.

“I've been involved in the EB-5 industry since Congress enacted it and President George H.W. Bush signed the Immigration Act of 1990 that established the EB-5 preference for investors,” he said.

What are some current trends you are seeing in the EB-5 market?

The EB-5 market should expand in 2021 given the fact that we and other countries are coming out of the most negative phases of the pandemic. The U.S. is viewed as a more open and welcoming society after the Jan. 20 inauguration and some possibility that in the cauldron of finding sufficient votes to pass a big immigration reform bill, provisions that will either, directly or indirectly, increase the quota will help expand the EB-5 market, particularly in China.

How do you think the pandemic has impacted the EB-5 industry?

The pandemic impacted EB-5 industry directly as it shut down international travel significantly, created COVID-19 quarantines for certain in a number of countries, and the U.S. was viewed as a less attractive destination as we struggled to control COVID-19 spread, at least on a temporary basis.

What do you think needs to be reformed with the EB-5 program at the time it is up for renewal in June?

As a practical matter, our best hope is to have the current Senators Grassley and Leahy EB-5 reform integrity bill which includes an extension of the EB-5 program passed by Congress, given his broad industry support and the critical need not to take any risk in obtaining the longest extension of the EB-5 regional center program possible. Ideally, such legislation would increase EB-5 visa numbers but it's not likely. Given the importance of EB-5 investments throughout the country and in different states, and congressional districts and the popularity of the program, I think, it's likely to get an extension of the program along with EB-5 reform integrity legislation.

What would you change or do if you were president for a day?

If I could magically change anything, I would eliminate the 10,000-visa cap altogether on the grounds that we should have no limits on the number of qualified investors who wish to invest in U.S. and, thereby, enhance our economy and increase employment.

What are your thoughts about the redeployment situation and the best strategy to deal with it?

Redeployment is necessary in more cases now and the best way to deal with it is to comply strictly with current guidelines and not take risk with your client’s investment.

What achievement in this industry has been most rewarding? Why?

The biggest achievement of the EB-5 industry is that it has adapted to numerous challenges to keep the EB-5 program a valid option to a percentage of would-be immigrants who could not otherwise immigrate through family or employment.

What is your favorite quote and why?

“Do what's right and accept the consequences” -  Sam Houston

What about you would surprise others?

For about 10 years, I went around the world climbing some of the highest mountains and for more than a decade, I focused on building in downtown Houston the George H.W. Bush and Lyndon B. Johnson Presidential Monuments.

I had one interesting case that was turned into a major movie you can find on Netflix called “Mao’s Last Dancer”.