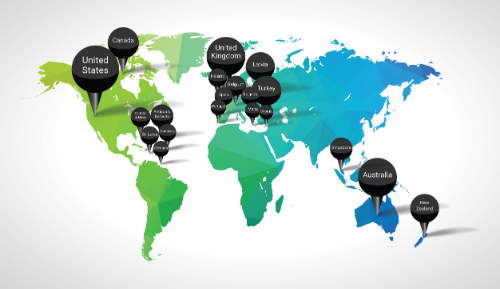 In search for freedom and quality of life, many of the world’s wealthy investors are looking into citizenship-by-investment programs, allowing them to obtain a second citizenship in exchange for an investment or donation.  The investors – typically citizens from the Middle East, China and Russia – are signing up to protect their wealth, give their family a better life, escape political troubles or to enjoy visa-free travel.

St. Kitts & Nevis introduced the first citizenship by investment program in the 1980s. Now, there are nearly 30 such programs around the world, predominantly in Europe and the Caribbean, but also in the United States, Australia, Singapore and New Zealand. Italy, Ireland and Turkey just joined the club over the past year, leaving the world’s wealthy more choices than ever to obtain a second – or more - passport(s).

A generation ago, it was rare to have dual citizenship. Now, it has become popular to own two, three or more passports. Why? Freedom to travel, freedom to open a business in a foreign country, and – in some cases – freedom from taxation. Take Malta, one of the most popular programs in the world: people can set up private equity or hedge funds there and benefit from a friendly tax regime.

A second passport from an EU country, like in Bulgaria, Hungary, Malta, Cyprus or Austria, also gives you the right to live and work anywhere in the European Union, and an EU passport will allow you to open a bank account anywhere in the world. The United States continues to be the most popular country for citizenship – accepting nearly 10,000 applicants per year through its EB-5 visa. An EB-5 visa provides the same green card as other qualifying processes, allowing the investor and his or her immediate family to live, study, work and retire anywhere in the United States. The EB-5 program helps foreigners obtain a coveted piece of American life while stimulating the U.S. economy through job creation.

The EB-5 program is followed by Portugal’s Golden Visa program, which had more than 4,200 applicants between 2012 and 2016, according to a government report. Canada is also an attractive destination when it comes to investment immigration. More than 4,700 immigrants have received visas under the Quebec Immigrant Investor Program from 2001 to 2016, according to Canadian government statistics. Under the Canadian program, a foreign national needs to invest $600,000, which is returned after 5 years.

Malta and Cyprus are the only two countries in Europe that offer a true citizenship-by-investment program, known as the Individual Investor Program. Between 2015 and 2016, 450 people applied to Malta and about half were approved, according to Malta government statistics. Under the program, investors must make a non-refundable contribution of at least $705,000 to the National Development and Social Fund, invest at least $162,000 in government-approved financial instruments and purchase a home for at least $380,000 or lease a property for five years. The Malta passport allows for visa-free travel to more than 160 countries - including European Schengen states.

Cyprus has about 500 applicants per year in a program where investors need to make at least a $2.16 million investment before being able to gain Cyprus citizenship and live, work and study in all EU countries, according to government reports. Other popular countries in Europe are the United Kingdom, which has more than 2,000 applicants a year of those who want to invest $2.5 million, and Ireland, where 380 applications have been approved since 2012 resulting in an investment of about $154 million according to government statistics.

Further south, more than 400 people apply to get permanent residency through the Investor or Investor Plus visa categories in New Zealand each year, government statistics show. Under the Investor Visa program, an investor must have three years of business experience, not be older than 65, spend at least 438 days in the country over four years, and invest at least $1.5 million over four years. Under the Investor Plus category, investors are asked to spend at least 88 days in the country over three years and invest $8 million for three years.

Australia, which granted more than 300 investment visas last year, doesn’t grant the permanent residence on the very first stage of investment, but uses a step-by-step visa principle regardless of the amount of investment, according to government report. The provisional 4-year investor and business visa works as the first step of investment migration to Australia. During this period, an investor needs to show an outstanding success of their investment in order to obtain a permanent investor visa. More than 90 percent of applicants are Chinese and the program has attracted more than $7.8 billion in complying investments into Australia.