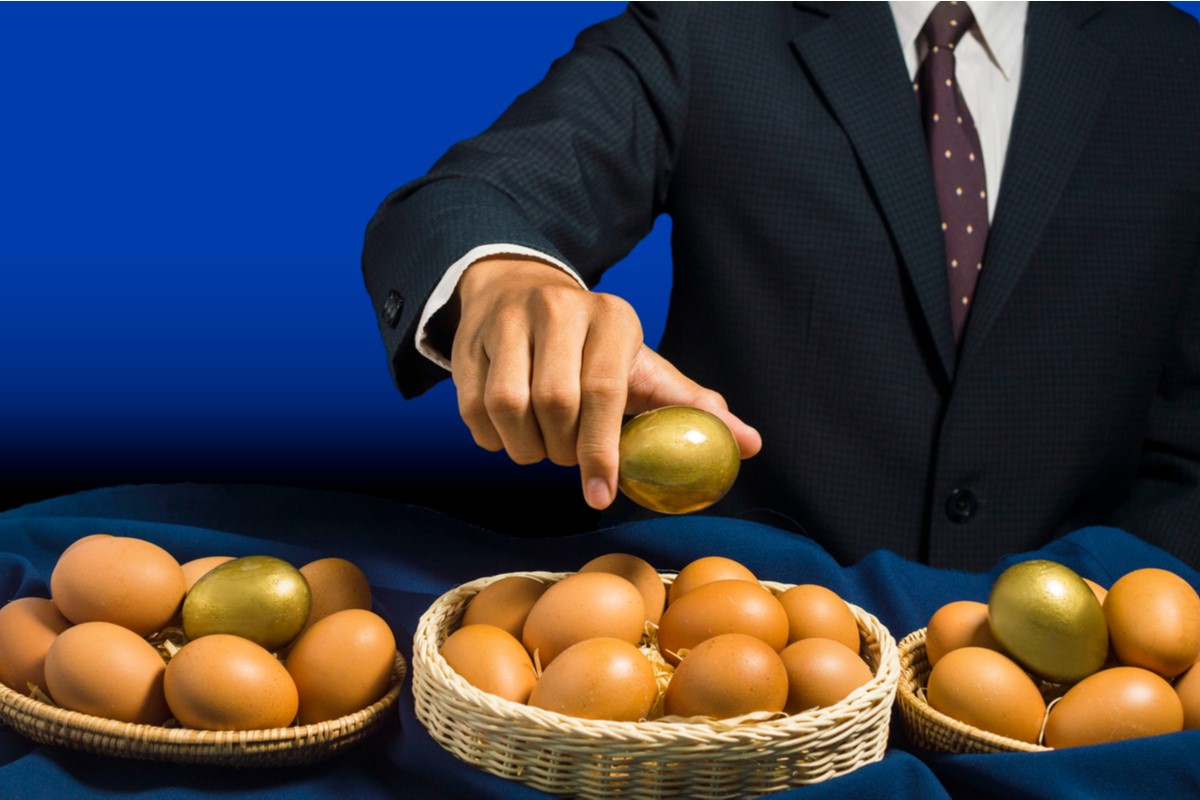 Eb-5 investors face many risks when it comes to qualifying for their green cards and getting a refund of their investment. However, based on the modern portfolio theory, where you decrease the risk by not putting all your eggs in one basket, EB-5 applicants can take steps to increase a successful outcome of both their immigration needs and investments.

Although the famous old saying “don’t put all your eggs in one basket” has been around for centuries, it was not until 1952 that American economist Harry Markowitz famously invented the modern portfolio theory. The phrase “don’t put all your eggs in one basket” essentially means that if you have ten eggs and you place them all in the same basket and if that basket drops, chances are that you will have ten broken eggs. On the same token if you place the eggs in ten different baskets, even if one or two of the baskets drop, you can still retain eight or nine eggs theoretically. The odds of the unfortunate event that all ten baskets drop would be very low. If all ten baskets dropped, it would have to be some bigger event that caused all 10 basket carriers to drop. That bigger force is analogous to market risk. As a result, the theory purports that by having the 10 eggs in 10 different baskets, one theoretically diversifies or lowers the risk of each individual basket falling, and the risk that remained would be the total market disaster (given that a large enough basket of investments are in the portfolio).

The individual basket risk can theoretically be so small, that is almost zero, given the large enough number of baskets to diversify through. Markowitz hypothesized that, by diversifying investments across a portfolio of assets, the diversified portfolio will have less variance (a proxy for risk) than weighted average variance of the assets in the portfolio, often less volatile than the least volatile asset in the basket. What this means in plain English is that by investing in one stock, one can never be sure that one stock will perform well, but, by dividing the investment risk across ten stocks, one can take comfort that it is unlikely that all ten stocks will go to zero tomorrow.

Why Is This Relevant to EB-5?

The two biggest risks for an EB-5 investor is receiving their conditional residency (and their green card) and getting their hard-earned investment dollars back. There are many risks associated with investors qualifying for their green cards, for example: problems with the projects being denied for a myriad of reasons ranging from the Targeted Employment Area and job creation issues or problems with an investors’ source of funds and how it was traced back to their original investment. On the USCIS website, it publishes statistics on I-526 and I-829 approval rates, which have been as of recent in the 89 percent and 80 percent ranges, respectively. What this tells us is that even though there exists a risk for investors to potentially not be able to get their green card, this risk is relatively low, especially if investors perform their due diligence and invest in a project with an adequate jobs cushion that is located in a TEA that is not questionable under current law. It is also imperative for investors to hire competent immigration counsel with experience in filing I-526 petitions.

Although there are no exact figures as to the total amount of dollars that have been invested through the EB-5 program since its inception, a few sources have published unverified reports that range between $25 billion and $30 billion. Although some of the EB-5 funds that have been raised have not been due for a payback yet, relatively speaking there have been very few projects that have returned investors’ funds. Some projects have been years overdue on payment deadlines according to their loan documents. The ones that have paid back investors, which have been few and far between have been sure to widely advertise this feat. While there are no public databases with published data on this topic, and the USCIS does not publish how many projects have paid back, one can estimate with fair amount of certainty that this number is under $1 billion, if we assume that $10 billion out of the $27-30 billion of the EB-5 projects that have been raised are not due for repayment yet, this would imply that the amount of funds invested in projects that have been paid back is in the 5 percent range. The biggest risk for EB-5 investors is not the regional centers’ ability to get them their green cards, the biggest risk is regional centers’ ability to repay their investment. This risk is the result of numerous project failures in the form of Ponzi schemes, outright frauds, projects that have been underwritten poorly or have been in non-traditional assets classes that banks do not lend to (which makes them very difficult to refinance), and other shortcomings that have become favorite topics for headline financial news over the past few years. For EB-5 investors to lose their EB-5 investment does not just have financial consequences, it can lead to immigration consequences as well. This is why fiduciary duties to EB-5 investors should be followed to an even greater degree, and “not honesty alone, but the punctilio of an honor the most sensitive” should be the standard of conduct for these fiduciaries.[2]

LOWERING THE RISK AS AN EB-5 INVESTOR

How can an EB-5 investor invest in a portfolio of EB-5 projects and diversify their investment risk the same way that sophisticated money managers do asset allocation for their high net worth clients? The answer is a bit complicated. EB-5 regional centers and fundraisers have traditionally been real estate developers, marketing specialists, and not sophisticated financial institutions like the investment banks on Wall Street that manage assets for high net worth clients. The portfolio model has been more difficult to get approved by the USCIS. Historically, there have been attempts at projects in a portfolio model that have been denied and some that have actually been approved.  The differentiating factor between the portfolio models that have been approved by the USCIS and the ones that have been rejected is that the USCIS does not allow the pooling of jobs but does allow the pooling of assets in an EB-5 portfolio fund. This has been the way that the USCIS has adjudicated projects within a portfolio model so far.

EB-5 Portfolio Models in the Market

Atlantic American Opportunities Fund was one such EB-5 portfolio fund that was successful in getting its portfolio model approved that did pool investors’ funds together to diversify investors' risks but required investors to pick one project for job creation purposes. What that means is that for the purposes of the investors’ job creation, I-526 petition and I-829 petition success are still reliant on the completion of one project, but the investors’ return on their investment and capital at risk can be diversified across a pool of investments.

Funds setup with multiple projects can help investors diversify their risk. By advancing bridge funds of the projects, such a fund would minimize construction risk and start on time before the EB-5 dollars are secured for the projects. Under Markowitz’s portfolio theory, the less correlation that investments in a portfolio have to each other, the less variance the portfolio will have in theory. That means a portfolio of all technology stocks or all energy stocks, in theory will have a higher variance than one that has less correlation by having stocks from different industry sectors. Such EB-5 portfolio funds theoretically can help minimize investors’ variance by the number of investments in the portfolio. It may also lower the variance by having different asset classes in the portfolio and assets in different geographic locations across the United States. The less homogenous the projects, the less variance that the portfolio will have according to Portfolio Theory. Asset classes such as hotels, apartments, condos, office buildings, and retail outlets all perform differently in different parts of the real estate cycle. Also, different regions in the United States can be affected differently by regional downturns or natural disasters. Imagine having a portfolio of EB-5 projects that are all located in Puerto Rico or New Orleans and all projects could be affected by a single tropical storm or hurricane. Having a well-balanced portfolio of EB-5 projects that lowers investors variance by the number of investments, asset classes, and geographies can conceptually lower an EB-5 investor’s variance, and hence investment risk.

In the EB-5 marketplace where almost all projects get approved for job creation by the USCIS, regardless of their safety or viability, the industry’s focus has been on green card approval instead of return of capital. Although getting green card approval is very important, it should be just as important for the industry to focus on taking steps to make sure EB-5 investors can receive their investment back. To have an industry with 89 percent initial green card application approval but less than an estimated 5 percent payback rate, one can see that emphasis is placed on one of the two important investment criteria by the investors. The industry has always focused on trusting the top immigration attorneys for the first category, but the industry should also focus on trusting the top money managers for the latter category. As there should be no reason why both categories cant’t have a roughly 90 percent success rate, the industry should start focusing on the investment part as well giving more trust to professional attorneys and professional money managers.