With the EB-5 Regional Center Program up for renewal, and following the tumultuous one-year extension approved last year, a lot of debate has centered on the impacts of the program and the entire EB-5 visa category in general. However, most analysis and discussions have focused solely on the impacts of the $1 million or $500,000 invested in a targeted employment area (“TEA”). Beyond the jobs and accompanying economic benefits gained from these projects are the benefits to the U.S. economy after the dust has settled and the investor has obtained a green card.

Given the core criteria of the EB-5 program, only a certain type of individual can participate. First, it predominately attracts the wealthy, or at least those willing to make a significant investment into the U.S. economy. This is self-explanatory given the $500,000 minimum investment threshold and associated relocation costs involved. Secondly, it attracts more risk tolerant and adventurous investors who are willing to uproot their lives to start a new life in a foreign country. These characteristics continue as these immigrants are integrated into their U.S. communities. Coincidentally, these are the traits found in more industrious sections of any economy – risk tolerance, adventure seeking and entrepreneurial mindedness.

The positive side of immigrant-investors’ relocation is, however, mostly overlooked in terms of economic impact estimates. This includes their impact to real estate, household spending, innovation, entrepreneurship and diversity both in their local community and also on a national level. In this article, we will look into some such impacts and highlight the tremendous benefit this program is having on the American economy.

Effect of Wealthy Immigrants on Entrepreneurship

Researchers outside of EB-5 have carried out significant studies on the impact of highly educated and accomplished immigrants on the U.S. economy. The United States has historically attracted talent in many innovative fields, and studies have connected this with a tremendous effect on growth. A study by the center for Latin American studies at UC Berkeley (CLAS 2013) found that in 2006, immigrants founded 25 percent of new high-tech companies with more than $1 million in sales, generating income and employment throughout the whole country. Innovation, entrepreneurial spirit and technological growth are the driving force for any advanced country like the United States. That being said, the ability to attract the most innovative and creative minds, which are characteristic traits of many EB-5 investors as evidenced by their business success and amassed wealth, is a tremendous benefit to having the EB-5 program.

The graph above shows that foreign-born workers tend to cluster in high and low education groups. However, considering that the EB-5 program is a self-selection of wealthy families, it is practically guaranteed that most of EB-5 immigrants will lie in the right half of the graph. Furthermore, considering the fact that many of these immigrants are wealthy due mainly to their entrepreneurial spirit, there is an exponential increase in the innovative effect on the economies where these immigrants finally reside. These families have also been shown to focus their educational efforts on the STEM fields currently being promoted by the United States government as is shown by the pie charts above. 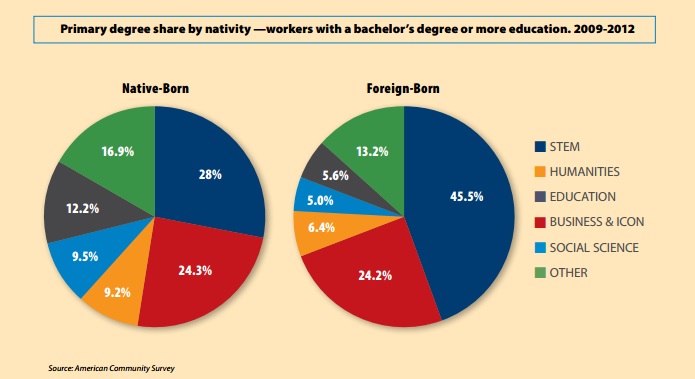 An often overlooked aspect of EB-5 immigration is the effect of investors’ household acquisition and spending as they settle into the United States. For example, 80 percent of investors in a sample partnership reported having a net worth above $1 million which implies that their spending will be greatly significant to the economies in which they settle. To find out how large that impact is, two parameters are vital, their yearly average income and their household spending patterns. “Accredited investors” are defined as: “a natural person with income exceeding $200,000 in each of the two most recent years or joint income with a spouse exceeding $300,000 for those years” (Rule 501 of Regulation D). Most studies use this rule to input a $300,000 average income into their models. To be conservative, this article does away with this assumption and uses the average income as declared from a sample of investors into a selected EB-5 partnership as an income input. The average yearly income for a sample EB-5 partnership investor is therefore $173,310.

For the high income household spending patterns, the US department of labor statistics consumer expenditure survey data is used to create a spending structure for the average wealthy family (over $90,000 a year). The data used is summarized in the table below.

Extracting proportionately the spending patterns and applying them to an average EB-5 investor’s income in an IMPLAN impact model reveals the impacts of economic activity on the U.S. economy. Each investor’s household spending therefore supports 1.5 American jobs and contribute $227,037 and $47,122 to the Gross Domestic Product and taxes respectively. As of the end of fiscal year 2015, there were 17,367 I-526 petitions awaiting adjudication, and it has been suggested that the number increased to over 21,000 during the first quarter of fiscal year 2016. These seventeen thousand families are awaiting adjudication and the opportunity to come to the United States and impact the economy through their household expenditures. These 17,367 families will be the cause for the creation of more than 27,000 American jobs and add over four billion dollars to the economy just from their yearly household expenditures.

If we also consider the spending associated with moving to the United States these impacts are greatly increased. Barnhart and Barnhart (2015) of Barnhart Economic Services in a past EB-5 Investors Magazine publication document other immigrant investor expenditures related to moving to, and living in the United States. Expenses in 2010 dollars are recorded as automobiles ($31,307.22), moving ($8,840.78), travel ($2,343.72), fees related to airports ($7), investments ($22,701), attorneys ($48,664), and government immigration fees ($10,806). Using these expenditures in a 2015 IMPLAN model reveals support of more than 22,000 U.S. jobs with a total contribution of more than $5 billion to the U.S. economy. 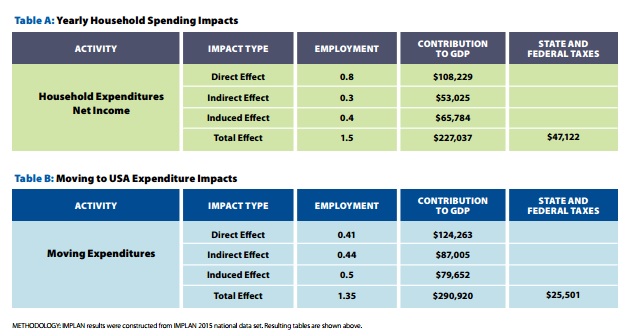 The EB-5 program has a minimum standard that each EB-5 participant family must create at least ten new American jobs through their investment into a new commercial enterprise. The implications of this article show that each immigrant family also creates about three jobs from relocating to the United States. This implies that with 17,367 immigrant-investors awaiting adjudication, 59,000 American jobs will be supported with $9 billion injected into the economy considering only their household spending and not their EB-5 investments or entrepreneurial endeavors. This number is representative of the both the initial expenses associated with moving to and settling in the United States and the costs household expenditures associated to living in the United States.

Boris Rubbani is an Associate Economist with CMB Regional Centers which is one of the biggest Regional Centers in the US today. He is an expert in EB-5 project feasibility and economic analysis as well as TEA verification of hundreds of potential EB-5 projects. Boris has a Master in Economics from Vanderbilt University. He can be reached at [email protected]

Barnhart and Barnhart (2015) The Economic Impact of Individual Immigrant Investors in the EB-5 Program: A Case Study. Published on August 20, 2015 https://www.eb5investors.com/magazine/article/economic-impact-of-individual-immigrant-investors-in-eb5-program