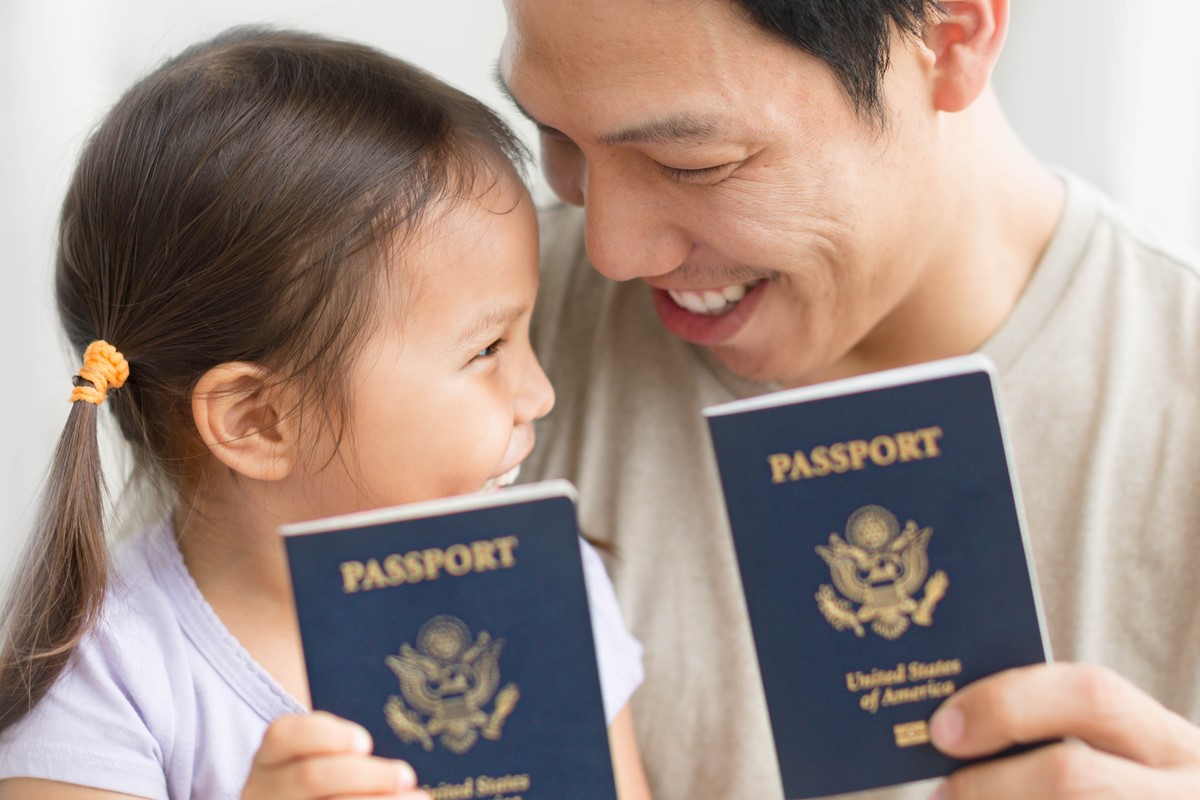 Investments, petitions, forms and reports: when it comes to the topic of the EB-5 program, discussions around it tend to be a little on the impersonal side. Of course, if there’s one organization that likes to analyze things from a strictly technical standpoint, it’s U.S. Citizenship and Immigration Services. The agency’s EB-5 immigration officers spend their days poring over business plans and I-526 petitions, critically analyzing these documents with a mental fine-tooth comb.

As a result, many of us often forget that there’s a man or woman behind that application—a man or woman with dreams and aspirations of coming to America, and a man or woman whose very real family is oftentimes stuck in applications limbo as they patiently await the decision on their fate from the USCIS.

I spoke with some Chinese EB-5 applicants and learned first-hand about the non-financial considerations that affected their decision to apply for an EB-5 visa and the process itself.

The EB-5 program was enacted by Congress through the Immigration Act of 1990. The goal was to generate a steady inflow of foreign capital and create jobs for U.S. workers, but early on, the program struggled to attract foreign investors.

In 1992, Congress introduced the EB-5 Pilot Program, which allowed EB-5 visa-seekers the opportunity to invest the required $1 million (or $500,000 in Targeted Employment Areas) through pre-approved regional centers. This eased job-creation objectives—no longer did foreign investors have to directly create 10 jobs. They only had to create 10 direct and/or indirect jobs. Despite this, the EB-5 visa remained relatively unpopular among Chinese and other investors (in 2004, just 16 EB-5 visas were granted to Chinese nationals[1]) and over the next two decades, program requirements were continuously eased by Congress in the hopes of boosting interest. 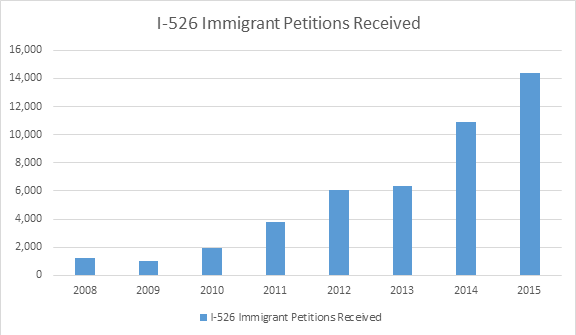 The measures began to work and the number of I-526 immigrant petitions received by the USCIS began growing steadily in 2010. A major milestone in the program was reached just recently when, for the first time ever, demand surpassed supply. The number of EB-5 visas issued each year is capped at 10,000; in 2014, 10,923 applications were submitted.

“Canada had a similar program that was very popular among Chinese nationals,” explains Jeffrey, an immigration attorney based in Los Angeles. “Those who could demonstrate a net worth of CAD $1.6 million (USD $1.5 million in 2014) and invested $800,000 in the form of an interest-free loan to the government received permanent residency.”

In 2014, the Canadian government decided to terminate this program, stating that it was generating few, if any, economic benefits for the Canadian economy.

“Suddenly, tens of thousands of applicants—many Chinese—needed to find somewhere else to invest their money,” Jeffrey adds. “Naturally, the EB-5 program acted as a suitable replacement option.”

Despite the eased requirements, applying for an EB-5 visa remains an arduous process for many Chinese investors – one that takes a toll on their personal lives.

“When my application was approved, I was ecstatic,” says Zhao, an EB-5 applicant from Beijing who now resides in Pasadena, California. “It took almost two years of hard work to reach that point. I spent over 200 hours of my own time researching, writing, filling out paperwork and working with my attorney, economist and business plan writer before I finally received the approval letter.”

At the time, Zhao was studying at the Guanghua School of Management in Beijing. “I was spending so many hours on my application that I was neglecting my studies. When I almost failed a course, I decided that I needed to allow the attorney and business plan writer to focus on their work while I focused on my schooling.”

According to Zhao, the challenges didn’t end once his application was approved. When he moved to the United States last year, he initially found it difficult to adjust to his new environment.

“I had been to the Unites States before moving here permanently, so I thought I knew what to expect,” explains Zhao. “But the culture shock was very real and it took me six months before I felt truly at home in my new country. Luckily, Americans are very friendly so my adjustment was quick.”

What shocked Zhao the most about the U.S.? “Braces,” he responds with a laugh. “Having very straight teeth is only starting to become a trend in China so braces are rare. Here, it feels like every young person has braces. They look like robots!”

Li, an investor from Chengdu, filed her I-526 petition last year. Her application is currently under review with USCIS. She frequently travels between Chengdu and New York for business and she experienced significant culture shock on her first visit to the Big Apple.

“In China, we do not tip our servers. When I found out that it is customary to tip, I had already dined at three restaurants. Each time I left without tipping. I paid with banknotes and waited for the server to give me the exact change. I was very embarrassed when I learned of my mistake.”

Zhao and Li both use the same word to describe the application process: stressful.

“It is maddening waiting for someone to decide your future,” says Zhao. “I was getting very anxious and worried that my application would be denied. I had difficulty sleeping. When it was approved, I felt a huge amount of relief. My anxiety vanished for several months after that but returned when it was time for me to officially emigrate to America. I was fearful that I would have difficulties in this new world and that I would be very lonely.”

“The lengthy application processing time causes stress,” states Li, whose application has been under review for more than a year. “If I am denied, then I will live with that decision. But I wish to know the decision now rather than in a year. Not knowing is perhaps more difficult than being denied.”

“A friend from school who also moved to the United States recommended that I enroll in an English class when I arrived,” says Zhao. “I did and it helped alleviate my worries. I made friends and became more confident in my verbal skills.”

Unlike Zhao, Li has a family. Her husband and 7-year-old son are included in her I-526 petition as derivative beneficiaries. She knows that the sooner her application is approved, the easier the move will be for her son.

“I’ve been speaking English to him so that he is better prepared for school in America,” says Li. “He understands it but struggles to reply in English, choosing to answer in Mandarin instead. I tell him that learning is best achieved by doing and that he should not be afraid of making mistakes.”

When asked if her son’s education was the number one factor in her choice to apply for a visa, Li provides resounding affirmation. “Chinese schools believe they are educating the country’s youth, but they are not. Children learn how to take tests but that is all. They do not learn to think critically and instead simply memorize a textbook word for word. And while a few Chinese schools are on par with those in the U.S., most fall short.”

Though Zhao doesn’t have a spouse or children at the moment, the prospects of starting a family in the U.S. was a driving force behind his decision to begin a new life more than 6,000 miles away.  “I want to be settled into a stable and prosperous life before starting a family. The U.S. is ideal in this regard. I know that my future family will be safe here. My children will receive a good education. They will be free to learn and study, and I won’t have to worry about the pollution like those in Beijing.”

While Zhao and Li both described the EB-5 application process as stressful, they also used the same word to summarize their feelings about a future in the United States: hopeful.

In the end, that is the recurring theme among Chinese immigrants looking to come to America on an EB-5 visa. They all dream of a greater future for their families—one where they are safe, free and equal. It’s a theme that I’m familiar with too, as a child of immigrant parents who came to the U.S. four decades ago to create a better life for my brother and me. Hope has been the driving force behind millions of immigrants’ decisions to come to America and it will be for many millions more.

While Zhao and Li still remain hopeful, I can say with confidence that I no longer hold hope for them. My hope for them was surpassed long ago by a certainty that these two ambitious professionals will find nothing but success and happiness for themselves and their families. The American Dream is alive in Zhao and Li—and the EB-5 program is their ticket to dream.

Aaron (Matt) Khalili is the founder of The Plan Writers, and has over a decade of entrepreneurial and strategic planning experience. Established in 2012, The Plan Writers is passionate about helping entrepreneurs succeed in America. Khalili has expertise in business plan writing and also serves as an expert witness for EB-5 litigation. He earned his MBA from the University of Southern California.