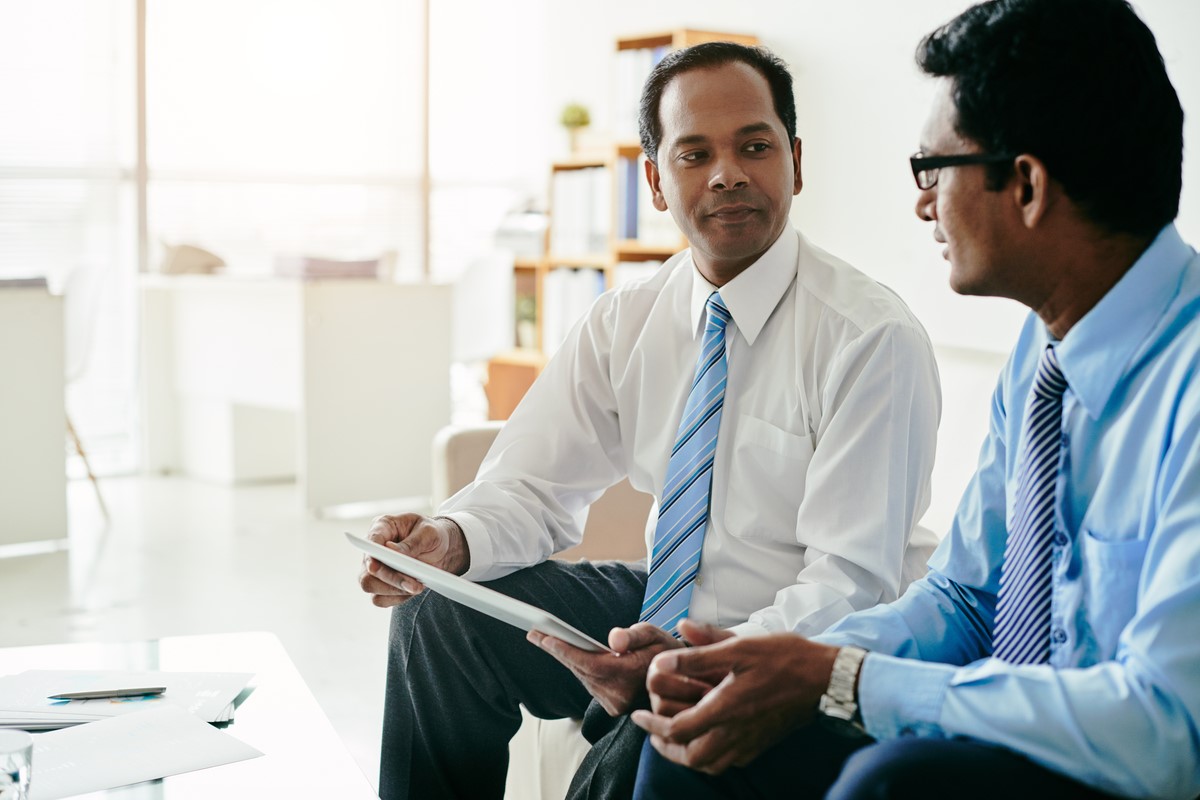 For Indian investors, the EB-5 visa represents both an opportunity as well as a challenge. As demand shifts from Indians residing in the U.S. to mainland India, there are some unique challenges and issues that need to be tackled.

As one of the fastest growing major emerging economy in the world today, India is set to grow the fastest over the coming decade.[1] Unsurprisingly, India’s millionaire-population is booming. Between 2007 and 2017, the number of millionaires in India more than doubled from 124,000 to 330,000. This figure is likely to triple, and India may well have a million millionaires by 2027.[2]

A surging millionaire population and the general perception equating an American green card with a successful and happy life makes India an obvious market for the EB-5 visa. Despite surging demand, there are significant challenges unique to the Indian context that must be tackled effectively to ensure the EB-5 visa continues to remain popular among Indian investors.

QUOTA LIMIT HIT FOR INDIA- IS IT ALREADY TOO LATE FOR INDIANS?

With an average processing delay of two years between filing and approval of the I-526 petition, there was a surge in pending petitions in 2016 followed by a steady increase to more than 850 petitions as of October 2018.

Combined reading of USCIS data of yearly new I-526 filings from India and petitions pending processing indicates visa retrogression for Indian applicants is inevitable and unavoidable. 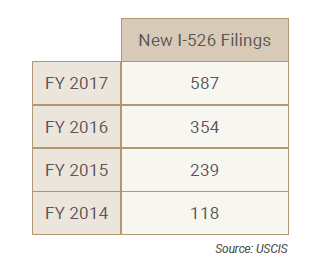 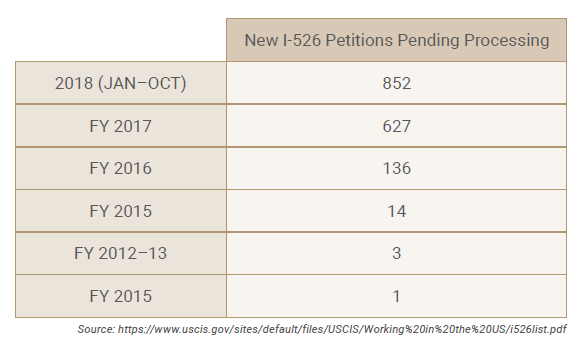 This means Indian investors applying ahead are likely to face longer processing delays through the entire EB-5 process. This is a significant challenge considering one reason for growing popularity of the EB-5 visa over other EB category applications was the excessively long wait for green card approval in the latter categories.

Of course, things are not likely to be as bad as CATO Institute’s estimate of a 151-year waiting period for green card applications filed by Indians with an advanced degree.

Yet, the current trend of I-526 petition approval by 18-24 months, the two-year wait for I-829 petition filing, and the two-year average processing period for green card applications is unlikely to sustain in the future.

While the initial impact of visa retrogression may not exceed, at least in the initial stage, a few months, processing times are likely to rise quickly as more H-1B visa holders, Indian investors, and parents of youngsters desirous of studying in the U.S. opt for the EB-5 visa route.

With India likely joining China and Vietnam on the visa retrogression list, an increase in the minimum investment requirement—unchanged at $1 million ($500,000 for TEAs) since the program’s inception—seems inevitable.

While there is no clarity on what the actual increase will look like, an Obama-era proposal sought to hike the minimum threshold to $1.8 million and $1.35 million for non-TEA and TEA projects.

What complicates matters for Indian investors is that the Indian Rupee is, after years of outperforming other currencies, is steadily depreciating towards its Real Exchange Rate levels.

While exchange rate fluctuation is a risk inherent in all foreign investments, it will magnify the overall impact of the investment increase for applicants from India.

Between 1992 and 2015, the Regional Center Pilot Program had a total of eight extensions. Including the one that extended the program’s validity till Dec. 7. 2018, there have been 13 extensions in a span of just over three years between September 2015 and December 2018.

Lack of clarity on the long-term future of the regional center program exacerbates the uncertainty caused by the long-pending increase in minimum investment requirements.

Considering that more and more Indians are viewing the EB-5 route as a faster and more reliable route to the U.S. green card as compared to the H-1B visa or other EB-category visas, any unexpected or drastic change in rules and regulations can dampen enthusiasm for the U.S. investment immigration visa.

IMPLICATIONS OF THE ‘AT-RISK INVESTMENT’ REQUIREMENT

Unlike China, most of Indian demand for the EB-5 visa comes from those already living in the U.S. As EB-5 visa demand spreads to India, applicants will have to be made to understand the complexity of the entire EB-5 process.

The fact that it is often viewed and praised as a faster alternative to the H-1B visa indicates that the average Indian applicant is not yet well versed with the nuances of the program and implications of the at-risk investment requirement.

Ensuring Indian investors, especially those from beyond the big Metro cities, recognize that the initial investment is always at the risk of loss and that there is no assurance or guarantee of the green card is very important and very challenging.

Indians residing in the U.S. may appreciate the complexities involved in setting up and running a business in compliance with all the investment, job creation, and other requirements mandated by the EB-5 visa.

Indian demand for the EB-5 visa will sustain and grow only if this awareness spreads to investors residing in India as well.

Historically, approval rates for EB-5 applications from India have been much lower than the global average.

The success of a direct investment project often depends on various factors like the existing business environment, the applicant’s business acumen, and extent to which the venture is designed to comply with the EB-5 visa requirements.

Regional centers offer the advantages of more professional planning, economies of scale, and availability of alternative options to ensure eligibility under the program. No doubt, comparing options and choosing the right regional center requires careful due diligence and monitoring. Yet, this route certainly is less risky compared to setting up a project or venture directly.

The trend seems to have changed in FY 17 with industry forums indicating 87 percent approval for Indian EB-5 applications through the year.

QUALIFYING AS AN ACCREDITED U.S. INVESTOR

Indians’ preference for direct investment may also be attributable to the fact that the regional center route is a simpler process if one is an accredited U.S. investor

While the accredited U.S. investor issue is a requirement under the American Securities law and not mandated by the EB-5 visa program, only those with an earned income of $200,000 ($300,000 together with spouse) for the past three years or with a net worth in excess of $1 million (alone or together with spouse) are eligible to apply for the EB-5 visa through the regional center route as an accredited investor.

Regional centers can issue securities to non-accredited investors by obtaining an exemption under Regulation D or Regulation S. However, these involve certain restrictions and conditions.

Regulation D prohibits the regional center from general solicitation and advertising, issue to unsophisticated investors, or to more than 35 non-accredited investors. Regulation S requires the offer and sale of securities to occur outside the US. Further, this regulation does not offer an exemption from state securities law.

This means the general perception that the ability to make a large one-time investment is all it takes to apply for the EB-5 visa is not accurate, at least in the context of applicability of securities laws to regional center investments.

Finally, an interesting and unique challenge in the Indian context is the negative perception surrounding investment immigration in India.

In recent years, many high-profile loan defaulters from India have, upon investigation, found to have relied on investment immigration programs to secure permanent residence/citizenship abroad. While not necessarily relevant in the context of the EB-5 visa, concerns about the reason why people apply for investor visas and how they are perceived is an issue that needs to be suitably addressed.

The backlog of Chinese EB-5 applications has resulted in an inevitable shift in focus to other countries. With a growing economy and a young population that views the United States as a ticket to prosperity and a better life, India is set to be the dominant source of demand for EB-5 visas.

Tackling challenges ranging from greater understanding of eligibility requirements and its granular implications to better perception management will ensure a mutually-beneficial connect for Indian investors and the American economy alike.

Vivek Tandon is the founder and CEO of EB5 BRICS, a go-to source for everything related to the EB-5 U.S. Immigrant Investor Visa program. Tandon, a lawyer and an investment banker, primarily focuses on educating investors in India and the Middle East about the EB-5 visa program, EB-5 regional center projects and EB-5 direct investments. He also holds licenses with the Financial Industry Regulatory Authority and U.S. Securities and Exchange Commission. He is associated with broker-dealer NMS Capital Advisors, LLC in Beverly Hills, California.