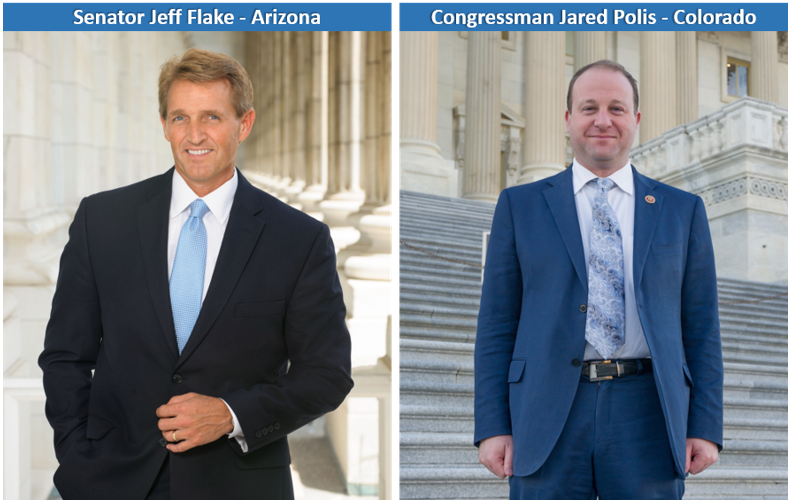 We are pleased to announce that Senator Jeff Flake of Arizona and Congressman Jared Polis of Colorado will join the 2017 Las Vegas EB-5 & Investment Immigration Convention as keynote speakers!

Senator Jeff Flake is a fifth-generation Arizonan who was raised on a cattle ranch in Snowflake, Arizona. Snowflake was named in part for Senator Flake's great-great grandfather. Prior to his election to the U.S. Senate, Jeff served in the U.S. House of Representatives from 2001-2013 representing the East Valley. As a member of the U.S. Senate, Jeff sits on the Judiciary Committee, the Energy and Natural Resources Committee, and Foreign Relations Committee where he also serves as chairman of Subcommittee on African Affairs. After serving a Mormon mission in southern Africa, Jeff graduated from Brigham Young University, where he received a B.A. in International Relations and an M.A. in Political Science. In 1987, Jeff started his career at a Washington, D.C. public affairs firm, but soon returned to Africa as Executive Director of the Foundation for Democracy in Namibia. In this role, Senator Flake helped monitor Namibia's independence process and saw that nation usher in freedom and democracy. In 1992, Jeff and his family moved back to Arizona where he was named Executive Director of the Goldwater Institute. In this role, Jeff worked to promote a conservative philosophy of less government, more freedom, and individual responsibility. Jeff and his wife, Cheryl, live in Mesa and have five children.

Jared Polis is an independent leader who uses his private and public sector experience to find pragmatic solutions to the challenges facing Colorado and the nation. First elected to represent Colorado’s Second Congressional District in 2008, Polis serves on the powerful Committee on Rules, the Committee on Education and Workforce, and the House Democratic Steering and Policy Committee. Polis believes that education is the single most meaningful investment America can make in its economic future and in its people. His efforts in this area focus on getting accountability right at all levels, expanding educational models that work, and improving persistently failing schools with data-driven models to reduce achievement gaps. Polis also works with Democrats and Republicans to reform our nation’s broken immigration policies, to advance the cause of civil rights and equality for all, and to protect Colorado and the world’s natural beauty and environment. While still attending Princeton University, Polis cofounded his first company, American Information Systems, a success he followed with the launching of bluemountain.com and Proflowers.com. He has been named an “Entrepreneur of the Year” by Ernst and Young.